Self-reflection In the Brain

How do you know how well you're doing when you perform a task? Let's make it really easy -- let's say I quickly flash a word in front of your eyes, and you have to say what that word is. Now how confident are you that you got it right?

Making this kind of decision falls into the realm of metacognition, or thinking about thinking. It's something that we do all the time -- "Am I remembering that right?," "Did I just see that?," and so on. It's also something that's critical when trying to learn something; if you can't accurately gauge your abilities, then you have no idea what you need to work on. Unfortunately, we're not always accurate -- and this is more true for some people than for others.

In a September issue of Science, Fleming and colleagues took advantage of this natural variance in metacognitive ability to -- what else? -- identify a corresponding brain region. Participants in their study performed a simple visual discrimination task: they had to try 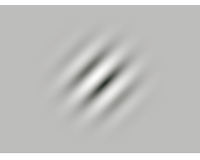 to decide which of two sequentially presented sets of gabor patches (like that one ->) was sharper, and then they had to rate how confident they were in their decision.

Obviously, one thing that can affect your metacognitive judgments is your objective performance... but that's not what we're interested in here. However, the task difficulty was manipulated on-the-fly so that participants didn't actually differ in their performance (everyone got 70-74% correct). After controlling for this, there was still a good amount of variance in people's accuracy -- some were spot on, while others were almost guessing at random.

So what happens when you look at the brains of these individuals? Are there any consistent differences in structure? In fact, there are: the volume of gray matter in the right anterior prefrontal cortex (PFC) was positively correlated with metacognitive accuracy, and the white matter tracts connecting to that region also showed a consistent relationship. It makes sense that differences would be found here, since the PFC is involved in higher-order cognition; its primary mode is to receive information from other areas of the brain and act on it -- something that is likely to take place even without the subjective feeling of deliberately making a judgment.

So what does this mean? Are some people born with more insight into their thought processes? Well, maybe, but then again, maybe not. Just because we're seeing a correlation between brain structure and behavior doesn't tell us anything about the source of the underlying variance. We don't know how heritable this mental process or the volume of this brain region are -- that is, the balance between genetic and environmental determinants.

And yes, correlation does not equal causation, meaning that just because we're seeing a relationship between cortical volume and accuracy doesn't mean this is the location of this mental process -- though the authors cite a study in which transcranial magnetic stimulation is used to temporarily suppress the activity in the PFC, after which metacognition becomes worse even though actual performance on the task is unaffected. This drove home for me just how modular the mind can be -- how things that would seem to go hand-in-hand can turn out to be entirely distinct.

Mental Illness and Violence: The Lack of a Link

Vaughan Bell of the excellent Mind Hacks blog has an important article up at Slate. It's an attempted prophylactic to media speculation in the recent Gabrielle Giffords shooting about the mental state of suspected gunman Jared Loughner.

Despite advances in public understanding about mental illnesses, there are still pervasive misconceptions, especially when it comes to safety and violence. To wit:

If you found evidence on the Web that Jared Lee Loughner or some other suspected killer was obsessed with soccer or football or hockey and suggested it might be an explanation for his crime, you'd be laughed at. But do the same with "schizophrenia" and people nod in solemn agreement. This is despite the fact that your chance of being murdered by a stranger with schizophrenia is so vanishingly small that a recent study of four Western countries put the figure at one in 14.3 million. To put it in perspective, statistics show you are about three times more likely to be killed by a lightning strike.

It's easy to ignore the common causes of violence (like alcohol or heightened emotions at sporting events) in part because they're so common -- no one gives it a second thought, and it's very unlikely to get on the news. However, whenever there's a rare but highly publicized incident of violence linked with a person with a mental illness, our confirmation bias kicks in to say, "See? I knew it all along -- he had to be crazy." There's a comparison to be made here with auto and airplane death rates, but I'll let you connect those dots.
Posted by Unknown at 8:09 AM 0 comments